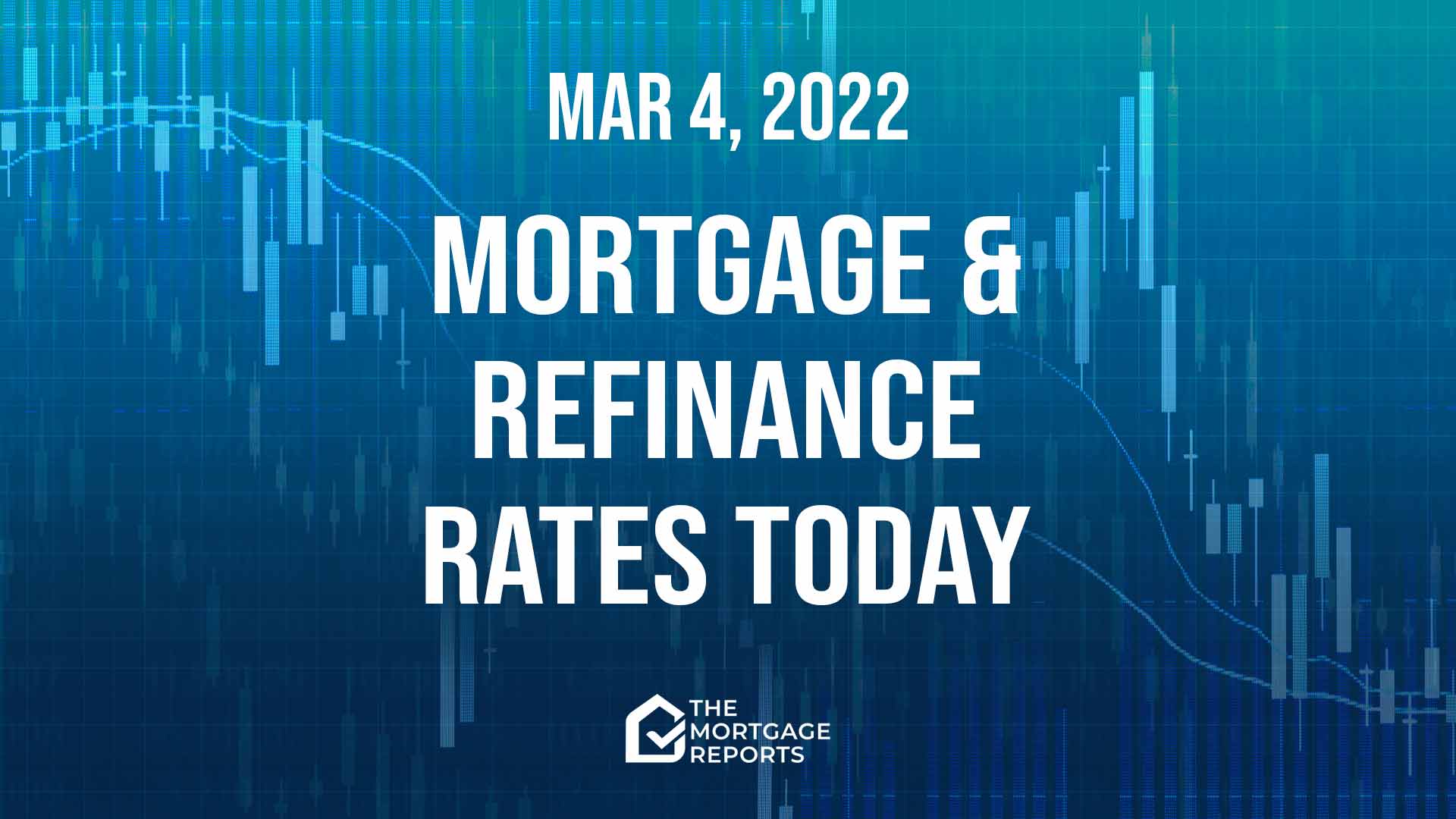 Average mortgage rates barely moved yesterday, just inching higher. And, following the roller coaster of sharp rises and falls this week, that counts as a win.

Russia’s activities in Ukraine still have the capacity to shock markets. And we’ll likely see that in action today.

But, I suspect, investors’ responses to those are likely to affect mortgage rates increasingly occasionally and briefly. And it would probably take an outrageous atrocity (yes, the whole invasion is atrocious) to send those rates lower for long.

Here at home, we’re looking at a highly likely Federal Reserve rate hike in 12 days. And an even higher inflation rate than the current one due to Russia’s war and its impact on oil prices and other commodities. On days when the news from Ukraine is less awful, those are likely to push mortgage rates higher.

Don’t lock your mortgage rate today or any morning when those rates look likely to fall. But my personal rate lock recommendations for the longer term remain:

*A change of less than $20 on gold prices or 40 cents on oil ones is a fraction of 1%. So we only count meaningful differences as good or bad for mortgage rates.

So use markets only as a rough guide. Because they have to be exceptionally strong or weak to rely on them. But, with that caveat, mortgage rates today might fall. However, be aware that “intraday swings” (when rates change direction during the day) are a common feature right now.

A lot is going on at the moment. And nobody can claim to know with certainty what will happen to mortgage rates in coming hours, days, weeks or months.

Not much can distract markets from the Federal Reserve’s plans to counter inflation and the economic consequences of Russia’s war in Ukraine. But the official, monthly employment situation report is rarely ignored.

This morning’s one for February was spectacularly good. With 678,000 new jobs added to nonfarm payrolls compared with analysts’ forecasts of 440,000. The unemployment rate fell to 3.8% from 4% in January.

Yesterday, Federal Reserve Chair Jerome Powell was back on Capitol Hill, this time testifying before the Senate Banking Committee. And he confirmed that the war in Ukraine had had little effect on the Fed’s plans.

“I do think it’s going to be appropriate for us to proceed along the lines we had in mind before the Ukraine invasion happened,” he told the committee.

The New York Times’s (paywall) report of the proceedings says:

Asked if the Fed was prepared to do whatever it took to control inflation – even if that meant temporarily harming the economy, as Paul Volcker did while Fed chair in the early 1980s – Mr. Powell said it was.

Mr. Volcker allowed the unemployment rate to reach 10%, triggering a recession in 1981–82. And, no doubt, Mr. Powell will be hoping to avoid such pain.

Of course, the war in Ukraine could still push mortgage rates lower. But I’d be surprised if it were to do so again as sharply as it did earlier this week. And I doubt any falls will be sustained. As I said at the start of this week when identifying what’s really going to drive mortgage rates on most days, “It’s the Fed, stupid!”

For a more detailed look at what’s happening to mortgage rates, read the latest weekend edition of this report.

Over much of 2020, the overall trend for mortgage rates was clearly downward. And a new, weekly all–time low was set on 16 occasions that year, according to Freddie Mac.

Since then, the picture has been mixed with extended periods of rises and falls. Unfortunately, the rises have grown more pronounced since last September, though not consistently so. So far in 2022, rises have been appreciable and relatively consistent.

Freddie’s March 3 report puts that weekly average for 30–year, fixed–rate mortgages at 3.76% (with 0.8 fees and points), down from the previous week’s 3.89%. But that report won’t have included that Wednesday’s sharp rise.

The numbers in the table below are for 30–year, fixed–rate mortgages. Fannie’s were published on Feb. 18 and the MBA’s on Feb. 25. But Freddie now publishes these forecasts every quarter, most recently on Jan. 21.

Of course, given so many unknowables, the whole current crop of forecasts may be even more speculative than usual.

Coming Clean: How to Tell Your Partner You Lied About Money

Why “The Merge” Matters for Ethereum and Cryptocurrency

20 Grants To Pay Off Student Loans and End Your Debt

More Americans are Forgetting to Pay Their Bills

Should You Use a Personal Loan to Start a Business?

What Is a Hostile Takeover? Explaining Elon Musk and Twitter

Peloton Testing Out Bundled Pricing as Company Looks for…

Ad-Supported Tier May Be Less Likely for Netflix, Password…