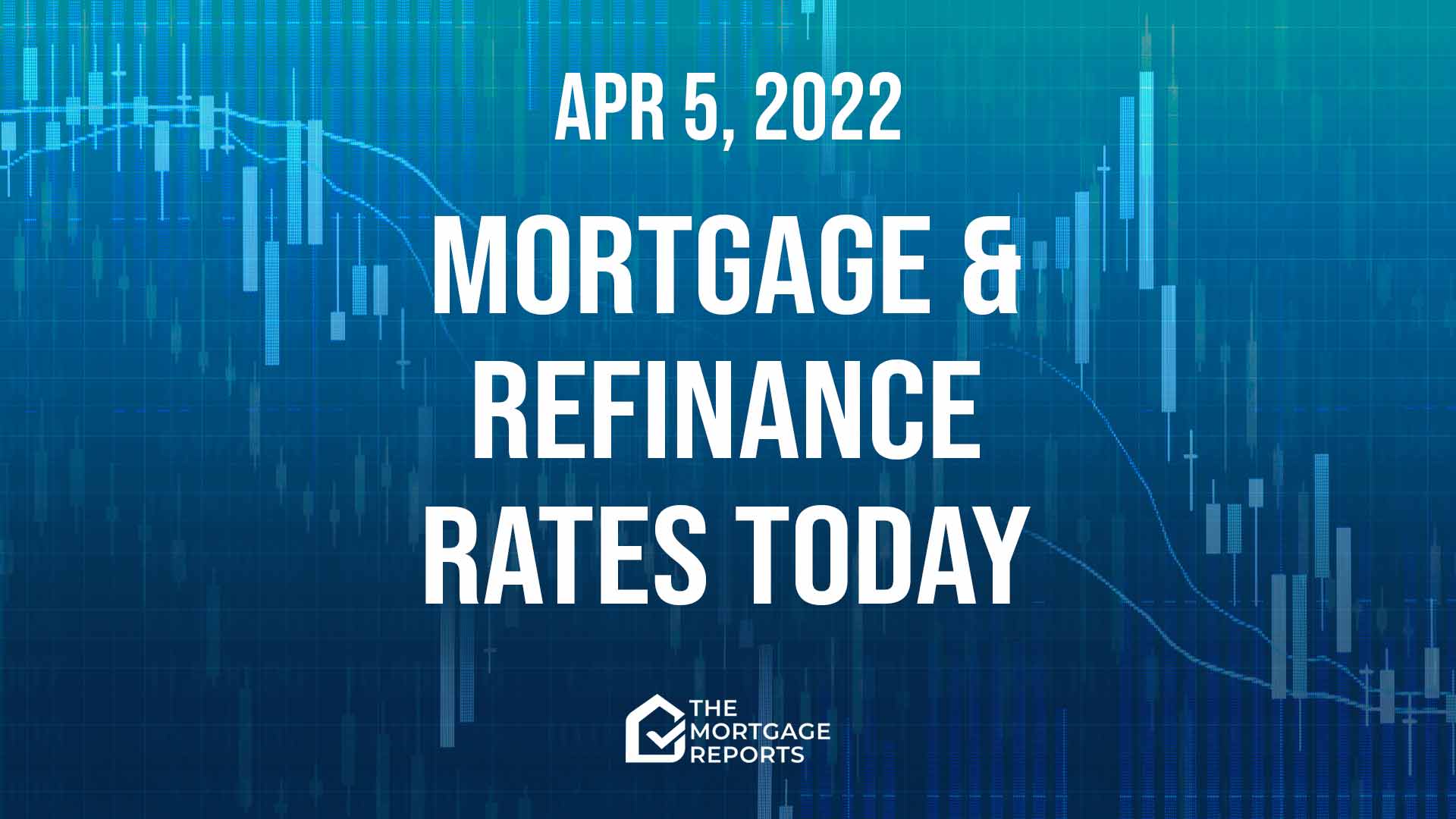 Average mortgage rates fell modestly yesterday. And they’re now appreciably lower than they were on Mar. 25, which was when we saw the last giant rise. But they remain much higher than they were before that day.

Judging from early movements in markets this morning, mortgage rates today might rise, possibly sharply. That might change as the hours pass. But it would take quite a turnaround for those rates to fall.

I still think that the current run of falling mortgage rates won’t last long. And I suspect those rates have further to climb. Please read below for my reasons.

But mine is only one voice. And I might easily be proved wrong by events. Whether you take any notice of my advice will probably be down to your own appetite for risk. But, if you choose to gamble on rates falling further, be aware of the stakes and odds.

So, my personal rate lock recommendations for the longer term remain:

So use markets only as a rough guide. Because they have to be exceptionally strong or weak to rely on them. But, with that caveat, mortgage rates today might rise. However, be aware that “intraday swings” (when rates change direction during the day) are a common feature right now.

Yesterday, JPMorgan Chase CEO Jamie Dimon published his annual letter to shareholders. CNN Business describes Mr. Dimon as “one of the world’s most influential business leaders.” And his views certainly carry a lot of sway within markets.

One part of Mr. Dimon’s letter was especially relevant to future mortgage rates. He wrote:

I do not envy the Fed for what it must do next: The stronger the recovery, the higher the rates that follow (I believe that this could be significantly higher than the markets expect) and the stronger the quantitative tightening (QT). If the Fed gets it just right, we can have years of growth, and inflation will eventually start to recede. In any event, this process will cause lots of consternation and very volatile markets. The Fed should not worry about volatile markets unless they affect the actual economy. A strong economy trumps market volatility.

Regular readers will immediately understand what Mr. Dimon is saying. But others may stumble over the term “quantitative tightening” (QT). So let’s dig into that and then return to the thrust of his argument.

Quantitative easing (QE) is what the Federal Reserve did to stimulate the economy when the COVID-19 pandemic began to bite. It kept interest rates very low. And it bought industrial quantities of certain bonds, including mortgage-backed securities (MBSs). Those MBS purchases pushed mortgage rates to artificially low levels.

Quantitative tightening is the opposite of QE. The Fed plans to hike rates, probably sharply. And it says it will sell MBSs, promising to publish a detailed disposal plan on May 4. If QE dragged mortgage rates to new lows, you can imagine the likely impact of QT.

It’s vanishingly unlikely that Jamie Dimon has ever heard of me or read a word I’ve written. But we agree in several ways.

He believes that interest rates could move “significantly higher than the markets expect.” And so do I. Of course, he’s talking about interest rates generally. But, if rises in those exceed expectations, it’s likely mortgage rates will, too.

And Mr. Dimon implies that QT will be tougher than many are expecting. That also corresponds with my view. Of course, almost everyone agrees that market volatility is unlikely to fade anytime soon.

Mortgage rates have been climbing at a near-record pace over the last couple of months because markets have been pricing in what they expect the Fed to do next. If Mr. Dimon’s right and those expectations are too low, those rates will continue to increase as an overall trend (not on every day) for some time to come.

Of course, Mr. Dimon may have got this all wrong. Nobody knows the future. But there’s a reason he’s “one of the world’s most influential business leaders.”

Read the weekend edition of this daily article for more background.

Over much of 2020, the overall trend for mortgage rates was clearly downward. And a new, weekly all-time low was set on 16 occasions that year, according to Freddie Mac.

Since then, the picture has been mixed with extended periods of rises and falls. Unfortunately, the rises have grown more pronounced since last September.

Freddie’s Mar. 31 report puts that weekly average for 30-year, fixed-rate mortgages at 4.67% (with 0.8 fees and points), up from the previous week’s 4.42%. That most recent figure won’t have included most of this week’s falls.

The numbers in the table below are for 30-year, fixed-rate mortgages. Fannie’s were published on Mar. 17 and the MBA’s on Mar. 22. But Freddie now publishes these forecasts every quarter, most recently on Jan. 21. So its figures are already looking very stale.

Of course, given so many unknowables, the whole current crop of forecasts might be even more speculative than usual. I’m afraid I’m less optimistic than any of them.

When is a Short-Term Business Loan the Right Choice?

6 Types of home improvement loans: Which is best for you?

Can I Get a Business Loan with Low Revenue?